#HamFringe Trends in 2019
by Stephen Near

Summer has finally arrived and for many theatre artists, that means the start of another Fringe season. Several Fringe Festivals, such as Montreal, Ottawa and London, have come and gone while others, like Toronto and Regina, are still going strong. Here in Hamilton, mid-July signals the start of our own Hamilton Fringe Festival and the program (a guide to what’s on) has been out for awhile now. So, every year about now, I always take a highlighter to my schedule and see what sort of patterns I can find in the myriad crop of shows. So, without further ado, here are my Top Trends of the #HamFringe.

#femmefest #HamOnt
Hamilton Fringe has always been home to some stellar female talent and this year will see even more. From one woman confessionals to larger ensembles to full on musicals, you’ll want to catch these shows by new and established women in theatre. Solo shows lead the pack with critically acclaimed stand-outs like Slow Dancing With Mediocre Boys by Grace Smith, Bedwetter featuring Tamlynn Bryson, Squeeze My Cans by Cathy Schenkelberg (direct from Scientology’s Celebrity Centre in Los Angeles), Tammy McLeod-Casey takes the audience on a ride through The Merry Musings of a Mediocre Madwoman, and every animal lover will be clamouring for a seat in Animal Show by Katie Hood. Festival veteran Caitlin Robson is featured in Fairytale Femdom and Calgary’s Wendy Froberg presents A Woman of a Certain Age (R). In the Mini-Series, local Annalee Flint asks Under Where? while Fringe newcomer Emanuella Hall presents My Breast Self. And you won’t want to miss this year’s winner of the Hamilton Fringe New Play Contest We All Got Lost, written by Camille Intson and featuring a powerhouse cast of female performers.

The One With the Music
Last year’s smash hit Bitch Island proved that the Fringe musical will never die as a raucous, and award-winning, crowd pleaser. But it takes a lot of artists, working at the top of their game, to pull off a great musical for the Festival. Will these shows have what it takes? Why not buy your ticket and find out? At $12 a ticket (even less with a pass), it’s worth the gamble to find a hot new musical ready to explode off the small stage. Coming from their run in Ottawa, London and Toronto, get your tickets early for Fuckboys the Musical. Fans of Jane Austen can catch the acclaimed Promise and Promiscuity: A New Musical by New Zealand’s Penny Ashton and if Neil Diamond is your thing, then don’t miss Diamond in the Rough by Will Gillespie. If those don’t tickle your fancy, you may consider joining a (Sex) Cult: A Musical (S)Explosion. A Time of Future Tales brings a post-apocalyptic kitchen party to life, while One Last Toast to the Schafer Street Queen follows the plight of a down-and-out Alberta mining town, and You Want It What Way? A Boy Band Tale tells you all you maybe didn’t want to know about boy bands.

Hey! Isn’t That…?
The arts scene is Hamilton is a relatively small pond. Whether it’s watching a concert at Supercrawl, inside a gallery for Art Crawl, or at the annual Arts Awards, I can always recognize someone who has made a cultural imprint in this city. The Fringe offers a plethora of such opportunities and this year is no different. Staircase owner and local stand-out Collette Kendall returns for Clit Wit! A Feminist Rude Awakening, while local improv troupe The Understudies bring us their musical-sketch show Swipe Right for Love: A Musical Improv Show. Back from Ottawa, David Brennan Exhumed returns the local comedian to the Festival along with another Fringe favourite Izad Etemadi in Leila Live! Physical theatre by Lori Le Mare and the Hamilton Aerial Group are back with La Nuit du Vagabond while longtime Artword duo Ron Weihs and Charly Chiarelli feature the story of Charly’s Piano. Don’t miss storytelling with a Western twist from Hamilton’s one and only Tor Lukasik-Foss in Tiny Bill Cody Sees the Devil and catch the acclaimed Stephanie Hope Lawlor directing the Hamilton Conservatory for the Arts Youth Master Class in Connections. As well, the award-winning Trevor Copp and Tottering Biped Theatre will bring back the physical theatre piece Journey to the East while a new play exploring gentrification by Sky Gilbert, Bungalow, also makes a debut.

Short, Sharp, Shock
A mini-Fringe show here, a sketch comedy there, a traveling promenade experience and an offbeat performance in between. Fringe can be a veritable grab-bag of quick and/or dirty creations by a diverse collection of artists and this year has much to offer. First of all, Collectif BUS 1.2.3. presents the immersive multilingual multimedia creation Babel-o-drome at Hamilton’s Museum of Steam and Technology, while Bad Ideas explores 9 stories told by 4 performers playing 33 characters so you might have to keep score. Followers of dance should catch A Two Piece by choreographers Geordi DiRocco and Jake Poloz, but if film noir is your thing then don’t miss the duo of Bushtits, Shihtzus & Private Dicks: All’s Fur in Love & Noir and The Promised Land. We’ve Come From Away (Toronto): A Sketch Comedy is an award-winning sketch troupe from – you guessed it – Toronto, while Come to the Edge! features a smorgasbord of artists, musicians, wheelchair dancers and live scenographers. A late addition to the program, accomplished storytellers Izzy and the Naz have some scrambling to do and some stories up their sleeves. See what happens when the Poet meets the Violin in Infinite Sequels, or an actor faces a dilemma in Jason Sherman’s “Equity Rules”, or just get the low-down on Steeltown with Mark McNeil’s Hamilton for Beginners.

The Drama! The Drama!
Serious can be a tough sell at the Fringe. But I routinely seek out shows that take the heavier road. Risk is the name of the game here so check out some the following shows by some stand-out dramatic artists. First up, Colin Bruce Anthes and the acclaimed Twitches & Itches Theatre unveils Daniel MacIvor’s Monster while Jim McCaskill gives us some H.P. Lovecraft in Final Log. Award-winner Francesca Brugnano debuts a new speculative drama in The Greatest Minds, Tien Providence debuts the provocative new play Back Home, and Gritty City Theatre brings David Auburn’s taut two-hander Lost Lake to the Festival. Me as Well as Also gives audiences a little absurdity with their drama, while Mercury Man: The Last Performance of Orson Welles delivers on its title, and The Easter Bunny brings audiences for a ride down a nightmarish rabbit hole.

A Show With A View
The Fringe is often a home to the new and unique and these shows tell a new story or re-frame a familiar experience from a fresh perspective.  Get the inside scoop from the coat room in Black Wool Jacket, bring your handicrafts and get some work done at The Knitting Pilgrim, or draw your own conclusions about a flag and a town hall at How To Confront A Rhinoceros. Explore what identity means with the folks at not_ALL.?filetype:Unknown, Diamonds on Plastic, and look deep at what lies at The Bottom of the Cup. Learn, love and laugh with award winners Jimmy Hogg: Like A Virgin and Confessions of an Operatic Mute.

Plus Family Fringe
A trend in and of itself, this year’s Fringe features special activities and a trio of shows aimed specifically at the younger set. One-man-show performers Dan Boyer and Rob Malo are coming to town: Dungee the Dragon & the Just-Okay Juggler relies on learning new skills to defeat a dragon and TiBert in Hamilton is an award-winning interactive bilingual kids’ show flying in direct from Winnipeg, MB. Then there’s the ensemble of The Butler: A Superhero Detective Story by Hamilton’s Red Pants Productions, with an already sold out opening performance. Finally, the Festival will host a Kids Club in Gore Park with guided activities from 12pm-3pm every Thursday to Sunday, and features the Family Fun Day on Saturday the 20th with food trucks, buskers, live music, and lots of fun and activities for families of all ages and sizes. 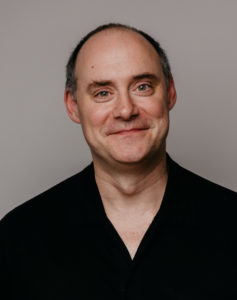 Stephen Near is a playwright and educator living in Hamilton. His plays have been performed as part of the Ottawa Fringe, the Toronto Fringe, the Hamilton Fringe, New Ideas, SummerWorks and at Theatre Aquarius. Stephen is an alumnus of the Sage Hill Writing Experience and the Banff Centre and a member of the Playwright’s Guild of
Canada. Stephen has taught playwriting at Mohawk College and Redeemer University and is currently completing his Masters of Fine Arts in Creative Writing at the University
of Guelph. Stephen is co-founder of Same Boat Theatre in Hamilton and a recent recipient of a City of Hamilton Arts Award in the category of Arts Management. @SNear23