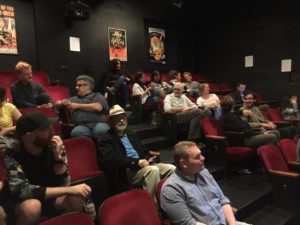 Participants gathering for the Long Table discussion at The Staircase in June. Photo by Stephen Near

At the beginning of June of this year, a group of Hamilton theatre makers formed a long table to discuss a severe issue that plagues theatre and performance in North American communities. This being the prevalence and dominance of white, male, cis-gendered, able bodied voices in theatre – on stage, off stage, on boards, in positions of influence, and so on. In attempting to navigate such a complex topic through discourse, with most parties trying in earnest to offer some kind of actionable solution, one thing that seemed to loom over the conversation as a potential barrier was the fear of failure and the lack of risk-taking in the theatre we see and make.

We often talk of the pressures we face when endeavouring to produce a staged work: failing to secure adequate funding, the likelihood of not reaching a large enough audience or getting enough bums in seats, the anxiety of having to create something of “good” quality – the list goes on. These pressures have persuaded many theatre makers and theatre institutions to stick with old practices that have “worked” in the past while taking few risks and, consciously or otherwise, preventing the evolution of theatre as we know it. This behaviour has left artists and audiences alike to wade through a bombardment of semi-polished works that all look and sound the same and who gets left out? Women, POCs, Aboriginal voices, disabled folx, and LGBTQ+. Not only are these communities excluded at all levels of the production and creative processes, but the work itself suffers too. 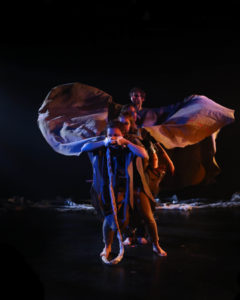 Back in April, I was fortunate to catch a performance of Tell Me What It’s Called produced by Tell Me Theatre through Why Not Theatre’s RISER project at The Theatre Centre in Toronto. Directed by Ximena Huizi, this piece separated itself from most staged works while simultaneously seeming to scream “THEATRE!” as the cast of eight playfully delivered improvised drama games/exercises, song and movement pieces, and shared laughs with the audience while playing a theatrical version of “Marco Polo” with Huizi and the eight performers’ voices equally communicated and expressed. In essence, the audience had the rare opportunity to watch a rehearsal, changing and evolving from night to night; it was an incredibly well guided and fleshed out rehearsal mind you, but it was very much unlike the polished, “perfectly” assembled fare we see every other night on stage. It was…fun. It was confusing. It was liberating. It was ambitious and it was NOT the final product. Tell Me What It’s Called was an experiment, a workshop, a piece of art that wasn’t concerned with success as we know it in the theatre world.

I left the theatre lamenting the fact that work like that would barely make a blip on people’s radars in Hamilton. I left the theatre hungry to see our community evolve by putting diverse voices in more positions of influence. Theatre is just a word – we can decide what it looks like. Just an offering.

Jesse Horvath is a graduate of McMaster’s Theatre and Film Studies program currently working as an actor/theatre artist in Hamilton. His theatre credits are primarily on the stage but he has found a rich community in Hamilton that has allowed him to explore producing and other administrative roles. Performing credits include Here Lies Henry, Ganga’s Ganja, A Few Good Men, and The Merchant Of Venice. Jesse can be found at the Rock Gardens every Summer performing in Tottering Biped Theatre’s Shakespeare at the Rock productions. 2018 marks Jesse’s return to the Hamilton Fringe for the first time in four years.