Home > Uncategorized > On The Fringe with Darren Stewart-Jones; Sherlock & Watson: Behind Closed Doors

On The Fringe with Darren Stewart-Jones; Sherlock & Watson: Behind Closed Doors

“There is nothing more deceptive than obvious fact.” So spoke Sir Arthur Conan Doyle’s tenacious character Sherlock Holmes over 120 years ago. Today, for writer & director Darren Stewart-Jones, that is just a challenge. Stewart-Jones talks happily about bringing his latest play, Sherlock & Watson: Behind Closed Doors to Hamilton Fringe’s Gallery mini-Series and his favourite venue from last year, the Factory Media Centre  at 228 James St. N. 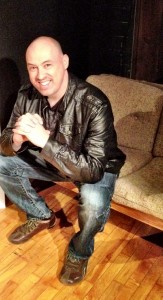 Employing a bit of Holmes’ famous deductive reasoning, Stewart-Jones imagines Holmes, and his consort Watson…well, consorting. “It’s not overtly sexual, but there is sexual tension there.” Referring to the fifty-six short stories and four novels of the sleuthing duo as ‘the canon’ Stewart-Jones gives us a clue about his status as a huge fan.

“I’ve always loved crime and mysteries…and I always imagined a more intimate relationship between Holmes and Watson. Even in my early teens I thought what Conan Doyle says is a little more than suggestive. “

When the copyright expired on Conan Doyle’s collection (all but 10 short stories), Stewart-Jones found the works just too tempting. We saw some of Stewart-Jones’ skill at understanding and morphing history with last year’s play the Judy Monologues. Based on voice tapes from Judy Garland that was, “captured brilliantly” according to the Hamilton Spectator’s Gary Smith.

A member of the Playwrights Guild of Canada, Stewart-Jones has  produced and directed plays at Buddies in Bad Times Theatre, the Alumnae Theatre, Toronto Fringe, Hamilton Fringe and the London One Act Festival. He is also Artistic Director of the popular HamilTEN –a festival of 10ish minute plays by playwrights from Hamilton and surrounding areas. Says the UK born creator, “When I moved to Hamilton I asked myself what I could do to make my mark and be creative in this city.” HamilTEN recently enjoyed its third year at the Pearl Co.

Sherlock & Watson: Behind Closed Doors has been recast for Hamilton. You will get to meet Mark Keller (Alarm fur Cobra 11 – Die Autobahnpolizei, Mountain Medic) as Sherlock and Louis Adams (The Metronome, It’s not Easy Being Greek) as Dr. Watson. 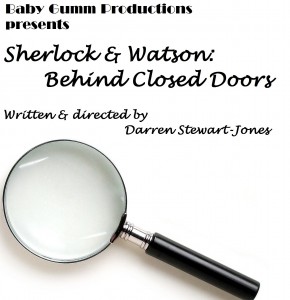 At the Gallery mini–Series Hamilton Fringe 2014

Stewart-Jones likes the Gallery mini-Series, and the challenge of conciseness. “The play really does stand on its own.” We will get to see what happens when Stewart-Jones stages an ‘intervention of sorts’ when Watson returns to 221 Baker St after his marriage to find Sherlock in a downward spiral. “It’s seamless now.” Stewart-Jones says, pleased with the development of the play. “It marries the new and old together. “

“The addition of small gallery plays to this year’s Hamilton Fringe is a welcome thing indeed. Let’s hope this is going to be part of the Fringe from now on.” Gary Smith, The Hamilton Spectator, July 2013.

Stewart-Jones’ company Baby Gumm Productions is also presenting Emerald City – A Musical Play based on characters from The Wizard of OZ books that, “…take a detour off the yellow brick road and find themselves in group therapy with Dr. Oz, Psychiatrist…” at the Toronto Fringe.

If you want a total spoiler experience you can purchase Sherlock & Watson: Behind Closed Doors on the ebook site Smashwords. Or you can wait till after the show and grab it as keepsake. I am going to take my curiosity with me when I go, mindful of some more of Conan Doyle’s words: “What one man can invent another can discover.” If any man can do it, it’s Darren Stewart-Jones.