Home > Uncategorized > On The Fringe with The Bell Ringer

On The Fringe with The Bell Ringer

Been to Paris lately? No? That’s alright; it’s one of the reasons we love the Fringe. This year you can find a ‘minimalist’ recreation of the famous cathedral in Notre Dame, Paris, once home to Victor Hugo’s ‘hunchback’ Quasimodo. If you have not read the Hunchback of Notre Dame lately, here’s a quick synopsis:

Using the Notre Dame Cathedral to represent all of society Hugo drops in the disfigured Quasimodo, who is judged by his looks rather than his character. His adoptive father, who exercises multiple nefarious motives, is given the benefit of the doubt, due in part to his more appealing looks. The beautiful gypsy Esmerelda complicates the entire story because: woman, leading the main character Quasimodo to alternately love, save, lose and eventually turn to dust by her side.

In this new adaptation, Bending Reality Productions take the 183 year old story and, while focusing on the obvious physical disability of the main character (now called Caleb) and the resulting stigma around that, they enhance this theme by taking a broader look at male body image and sexuality. A central question of The Bell Ringer is how and why the dark themes of Hugo’s work are still relevant to today’s standards of the human body. Using a circle, some ropes, original music and a lot of lighting effects, this incarnation brings both light and inquiry to a male’s perspective on disabilities, desire and body image.

The Bell Ringer at The Hamilton Fringe Festival 2014

The show’s creators all met at McMaster University and developed The Bell Ringer for the Honours Performance Series there. Winning Best Sound, Best Original Script & Best Set Design in that series, they’ve since added more scenes to the 60 minute performance.

Co-writer and asst director Taryn Crankshaw dug into the topic of disabilities and says the group wants to, “…address stigma. There is such a pattern of stigmatizing disabilities. We wanted to create a character who could explore his desires, his sexuality.”

From Hamilton, Burlington, Brantford and Cayuga, Bending Reality Productions was founded specifically to put on a Fringe show.

“Hamilton has an amazing art culture that keeps us coming back to collaborate for projects.” T. Crankshaw.

“We wanted to take an old story and make it relevant to modern day.” Says Director Jessica Marshall who thought she was going to be an English and History major but got derailed by a workshop at Theatre Aquarius and ended up double majoring in Theatre & Film and Multi Media and the rest was, well, history.

No less appropriately than taking a novel that has been hailed as the first work of Epic Theatre, there is a certain sense of harmony that The Bell Ringer comes to Players Guild, the oldest community theatre in North America, having adapted itself over its 139 year history.

And while it may have made sense, a few hundred years ago, to shun the disabled – folks were, after all, afraid of contagion – ultimately the resultant stigmatization displayed only a maladaptive need for society to protect itself. With the medical and social advances we now take for granted, stigmas are far less rational today, and yet they persist, with nauseating regularity. The Bell Ringer, via Paris and circles and ropes, shines a much needed light on that.

AND..it’s time to play WTH? or Where The Hell in Hamilton is this? Win two tickets to The Bell Ringer if you can correctly name the location of the picture below. Email [email protected] The winner will be announced Monday June 9! 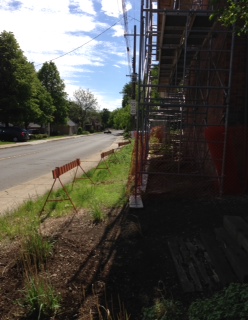 Where The Heck in Hamilton is this?